“We launched the Fusion Vario at Agritechnica last November and machines started work in Europe this season. The Fusion Vario’s have been very well accepted across Europe.
They offer the contractor or farmer the flexibility to make bales of silage from 3 foot 3 inches up to 4 foot 8 inches silage and bales from 2 foot 6 inches up to 5 foot 6 inch bales of hay or straw.

This allows the contractor to offer a wider range of services with one machine, which eliminates the need to return to the yard to change machines over the course of a days work. This saves time on the road and allows the machine and driver to keep working and maximise output and profits.

From the farmers perspective they can get larger bales if they want them which for silage will reduce film usage and costs and for hay and straw will reduce the amount of bales that need to be handled for collection, feeding or bedding”.

The McHale Fusion Vario is a unique machine which benefits from two new McHale patents:

McHale Patented High Speed Transfer System
As the transfer cradle moves the bale towards the wrapping ring, the wrapping roller closest to the bale chamber pivots out of the way which reduces the height the bale has to travel to get to the wrapper. This clever system saves time, as the patented system moves the bale quickly ensuring the McHale Fusion Vario delivers the highest output possible.

McHale Patented Tip Roller
The McHale Fusion Vario can wrap bales from 1.1 metres up to 1.45 metres with ease. The patented tip roller adjusts its height in line with bale size to ensure the plastic always goes onto the centre of the bale, regardless of the bale diameter. This ensures the correct overlap is always achieved.

Bale Chamber
The bale chamber on the McHale Fusion Vario is comprised of 3 heavy-duty endless belts. The belts are extremely hard wearing and are reinforced with synthetic material, which ensures that the belts can absorb and apply high pressure to the material in the variable bale chamber.

The bale chamber on the McHale Fusion Vario has a double drive. In more difficult conditions, such as wet heavy grass, if the primary drive slips slightly, the secondary drive will engage to aid belt and material rotation.

Wrapping System
This high-speed vertical wrapping ring can apply four layers of film to a 1.25 metre bale in approximately 20 seconds or six layers of film in 30 seconds.

In normal working conditions the ever efficient wrapping process is always complete ahead of the baler, meaning that the wrapping platform is always ready and waiting to capture the next ejected bale. The wrapping ring consists of the following features: 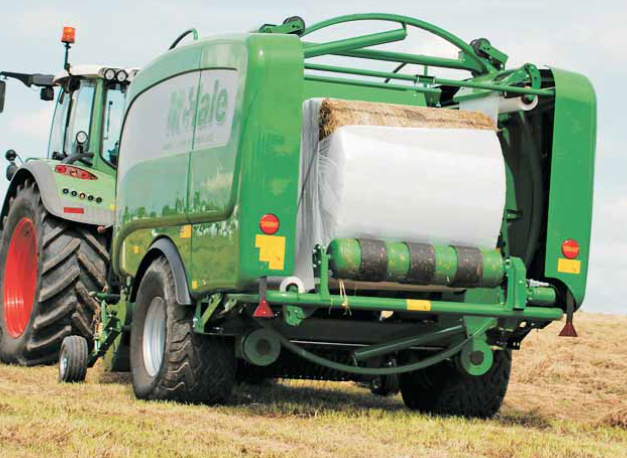 i Touch Control Console
The McHale Fusion Vario is a fully automatic baler wrapper. The i Touch in-cab control console provides clear indicators of machine performance on its large touch screen graphic display.
The i Touch control console is fitted with a rear camera as standard. In automatic mode the camera image will appear at different predetermined times on the screen such as when the bale is being transferred or being tipped.

Machine Operation
The i Touch control console, when combined with the load sensing valve on the Fusion Vario, makes the baler & wrapping operation fully automatic.

Bale Tip / Side Tip (OPTIONAL)
When tipping the bale the rear wrapping roller moves downwards and the Fusion Vario places its tightly wrapped bale gently on to the ground.
With the optional side tip the bale can be rotated through 90 degrees and placed on its end, thereby reducing stalk damage from crops such as Alfalfa.

The McHale Fusion Vario will be on display at the:
Irish National Ploughing Championships at the McHale stand Row 17 Stand 214.