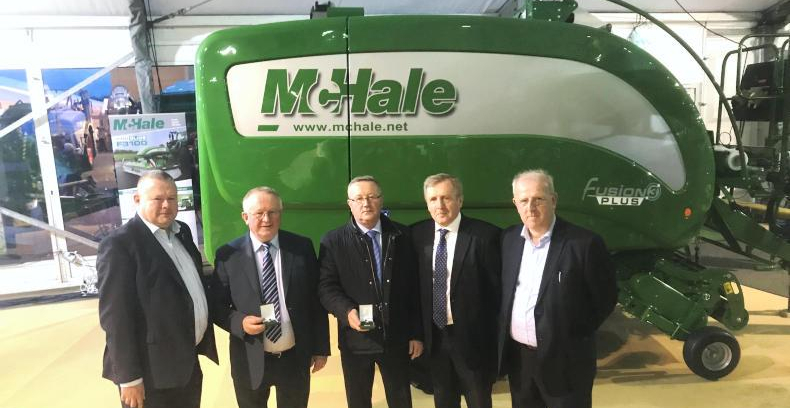 From time to time the FTMTA executive council presents a gold award to a person who has given a long or outstanding service to the association or the agricultural machinery industry. This award is open to all working FTMTA member firms and its staff. Peter Thomas Keaveney of the Irish Farmers Journal sat down with recent recipients, brothers Padraic and Martin McHale who picked up the prestigious FTMTA gold award at the show to discuss their road to success.

McHale was founded by Padraic and Martin McHale in the mid 1980s. Coming from a farming background and a family of 15, the brothers knew the value of hard work and in 1976 Padraic established a farm machinery retail outlet that sold used tractors and machinery and was later joined in this endeavour by his younger brother Martin. The manufacturing company McHale subsequently evolved from this business outlet which is still in existence today. 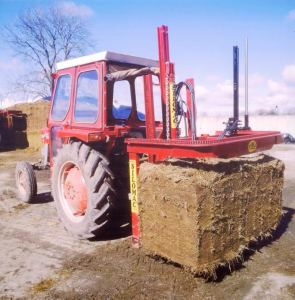 During the summer of 1982 the McHale brothers built a Silage Block Cutter and the following winter tested it on the home farm while refining it.

Padraic and Martin explained how this background was an excellent foundation for the design and manufacture of farm machinery, simply due to its direct contact with the end user and they decided to get into manufacturing when they saw a gap in the market for machinery to cut pit silage in the west of Ireland. At the time, imported machines found it hard to deal with the long grass in the area and as a result the brothers opted to design a machine they felt would do a better job. During the summer of 1982 they built a silage block cutter and the following winter tested and refined it on the home farm. Their first product was a Silomac blockcutter and a range of slurry pumping equipment followed this. The following year the brothers started to manufacture and sell their blockcutters locally. Martin began to establish a dealer network around Ireland and after this appointed dealers in Scotland and the UK with one of the first more unusual markets being Iceland. 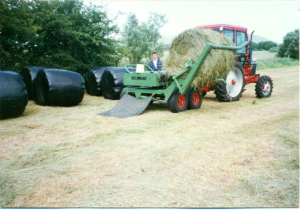 Martin McHale with one of the early bale wrappers.

In the early days Padraic looked after product design and manufacturing while Martin looked after sales and marketing. Although the business has grown substantially since, both brothers are still actively involved in the business and still manage these areas. In 1987, McHale manufactured its first round bale wrapper and less than two years later in 1989 made a conscious decision to specialise in this area and grow the company through market development. Martin then travelled to the UK and began to develop and expand a dealer network. Today this network consists of 70 dealers, many of whom have been working with McHale for over 30 years. 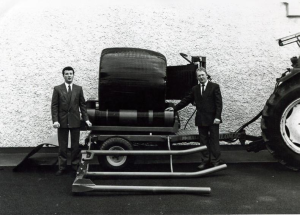 In 1987, McHale manufactured its first round bale wrapper.

Establishment of the McHale brand

Martin explained that, “In 1989 or 1990 before the first Smithfield show we had some concern about how Silomac would translate as it moved into export markets. As a result, we decided to rebrand the range under the McHale name.”

Outside the UK, one of the first exports markets actively targeted in 1994 was Australia. Martin said: “Australia was a good move for us. The grass season in Australia started in August or September each year when the European season was coming to a close. As a result, we could keep the factory busy all year round. In addition, for a company of our size at the time all our promotional material could be used as the language was the same. Today we still follow the grass season around the world and when the season finishes in the northern hemisphere we do good business in Australia, New Zealand, South Korea, Japan, China, South Africa and Chile.”

In 1995, Martin took the McHale name to Europe when they exhibited at the Agritechnica Show in Hanover, Germany and further expanded their European distributor network. They also started working on a range of square bale wrappers for field and static wrapping, unveiling the 995 linkage and trailed square bale wrappers and later the high-output 998. McHale achieved ISO certification for its quality standards in 1997 and also received numerous company awards for export and performance including the AIB export award and the Wang export company award.

By 1999, the company was shipping to 25 countries. To keep up with demand, McHale relocated from its home in Kilmaine and moved seven miles over the road to a 20 acre greenfield site in Ballinrobe, building a 100,000 square foot manufacturing plant. Over the years the plant has expanded and is now 320,000 square feet (8 acres of roofed area). 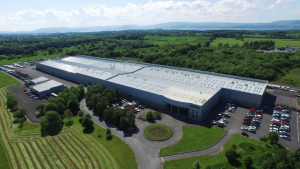 Aerial view of the McHale Manufacturing Facility in Ballinrobe.

A new Research & Development department was later constructed on the same site which is still run by Padraic and a number of key engineers who have been with the company since the R&D function was formally established in 1994. Today, over 10% of the Mayo workforce are involved in new product development.

By the turn of the century, many contractors had started to tow wrappers after their balers so that both jobs could be done with one tractor and one man. At this stage, the brothers had 20 years’ experience with manufacturing bale wrappers and selling balers in the harsh west of Ireland conditions, often described by other European manufacturers as the most challenging in Europe due to the difficult ground conditions and the heavy rainfall.

Padraic and Martin explained that they saw a niche in the market through knowledge gained across their dealer network, as most dealers also sold some brand of baler. The brothers explained that when they put all the information together it became clear that the market wanted a more reliable heavy-duty baler with stronger shafts, rollers, bearings and heavier chains. Padraic said: “Down through the years we have always got great support and feedback from both our Irish dealers and customers in relation to product development and testing. This provided us with a solid foundation for the development of products which could compete on a world stage.”

Unlike a lot of established players in the market, McHale did not have a baler to start with so it was not blinded by any traditional concepts. As a result the team developed an Integrated Baler Wrapper which split like a clamshell and where the lower section of the bale chamber transferred the bale. This machine was also unique in that it had a vertical wrapping ring instead of the more traditional twin-rotating dispenser formation. When the patented bale transfer and vertical wrapper ring were combined it resulted in a machine that could deliver up to 15% more output from a more compact machine. This innovation was highlighted when the McHale design team received the prestigious Royal Agricultural Society of England’s (RASE) Gold Medal at the 2005 Royal Show. 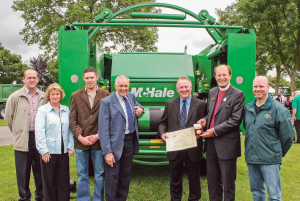 The RASE machinery awards are unique in that they are based on a rigorous examination of machine performance by agri-contractors and farmers. These judges chose the McHale Fusion Integrated Baler Wrapper for its economy of operation, compact dimensions, its ability to work well on sloping land, high output and the company reputation. Padraic said: “When the integrated baler wrapper was developed we described the concept to our dealer network and asked them to come up with a name and offered a trip to Ireland as a prize. Our importer in Greece came up with the Fusion name. Over time we have developed a strong brand around this name”.

In 2005, the company launched a standard fixed chamber baler. The brothers explained that this machine was designed as a direct result of customer demand. They noted that the baler used 85% of the components used in the Fusion and due to its success, in 2007 a non-chopper baler, the F540, and a fully automatic baler, the F560, were also added to the range. Over the years, the models have been superseded by the latest models in the Fixed Chamber Baler Range, namely the F5400, F5500, F5600 and F5600 Plus. In 2009, the company launched the V660 variable chamber or belt baler which was targeted at drier climates around the world where there was demand for larger bales. Today, McHale offers a total of ten balers in its range comprising four balers in the Fusion Integrated Range, four balers in the F5000 Fixed Chamber Range and two balers in the V6 Variable Chamber Range. 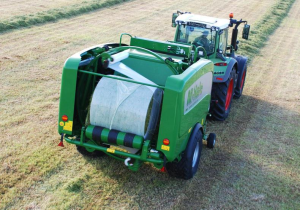 In 2015 McHale widened its grass line range to include its Pro Glide range of front, rear and combination mowers. Padraic and Martin explained that all mowers in the range have a number of key patents. Two years later at the 2017 Irish Ploughing Championships McHale unveiled two models in its Centre Delivery Rake Range – the R62-72 & R68-78. 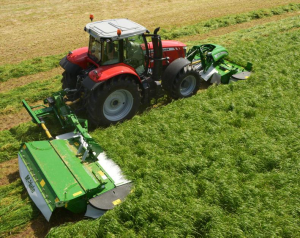 Pro Glide front and rear mower working on the factory test plot in Ballinrobe in 2015.

The McHale story is one of two brothers taking a voyage from humble beginnings and building a team helping to achieve worldwide commercial success. Today, the company is one of the largest employers in the region, with exports accounting for 90% of sales and their products can be seen working in 55 countries around the world. Padraic and Martin noted that their success can be attributed to the company’s philosophy of specialisation, intensive testing/product development with end users and a commitment to investing in research and development and the latest production technologies 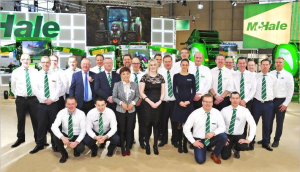 McHale sales team for the Agritechnica Show in Hanover 2017.

Padraic emphasised that McHale is a team: “Many of the people have been with myself and Martin for between 15 and 30 years. As the business has grown these people have taken on new challenges, developed new ideas and grown the business. This team has been fundamental to our success and I would like to thank them for their continued hard work, support and commitment. We are constantly looking for people to grow the team and have a number of exciting vacancies on our website which we need to fill over the coming months.”