The McHale Fusion 3 Plus was launched last year at Agritechnica 2013. This integrated baler wrapper is unique in that the bale is wrapped in the bale chamber with plastic instead of traditional netwrap. After the bale is transferred to the vertical wrapping ring additional film is applied to the ends of the bale, across Europe, this process is being referred to as ‘film on film’ technology.

Over the last few months, the McHale Fusion 3 Plus received three prestigious awards across three countries in recognition for its innovative film-on-film technology at the FIMA Agricola, Cereals 2014 and Royal Highland Show.

Also pictured is the FIMA award for Innovation in front of the McHale Fusion 3 Plus product board.

In June, the McHale Fusion 3 Plus received an award at Cereals 2014 in Cambridgeshire, England. The International Machinery Manufacturers’ Awards were launched by Cereals organiser Haymarket Exhibitions to recognise companies that have produced machines that stand out from the crowd by delivering a mix of innovation, cost-effectiveness and value. There were four categories covering cultivation equipment, sprayers, tractors and harvest machinery. After much debate, McHale was announced as the Gold Winner for Harvest Machinery.

In July, McHale received a third prestigious award for the film on film technology used on the McHale Fusion 3 Plus at the Royal Highland Show held in Edinburgh, Scotland. McHale received an award for their Technical Innovation of the McHale Fusion 3 Plus. Pictured below is Michael McCarthy, McHale Sales Manager, Scotland, receiving the award on behalf of McHale. Also pictured is the Royal Highland Show Technical Innovation award. 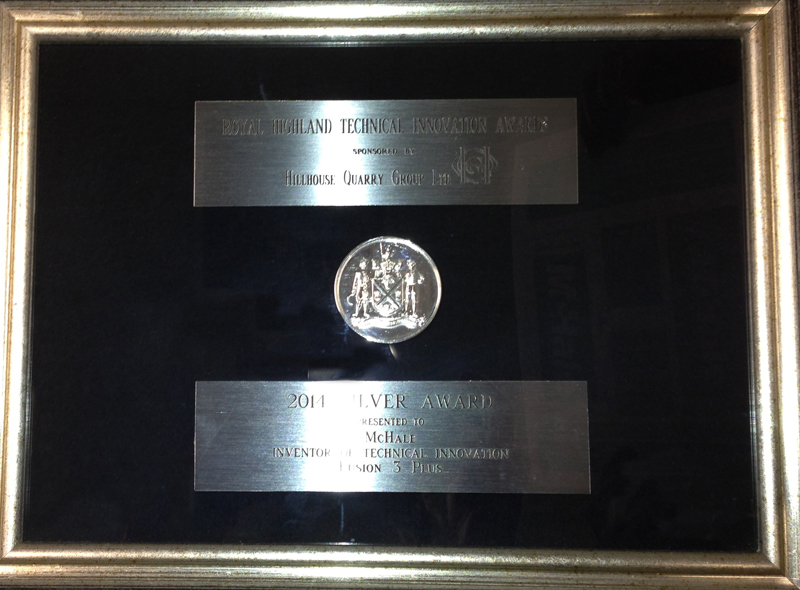 Film on Film technology provides a number of advantages compared to the traditional method of netwrap. These advantages include:

When plastic is applied to the barrel of the bale it can be stretched to approximately 20%. This stretch ratio is higher than what can be achieved with net wrap or twine and as a result the material is kept tighter which ultimately results in better bale shape.

As the plastic is being stretched as it is being applied to the barrel of the bale it expels more air than net wrap would and as a consequence this results in better silage quality.

As plastic is used to both bind the bale in the bale chamber and to wrap the bale, during the winter on feed out the farmer will be left with one form of waste. This reduces the time needed to feed the bale and avoids the unpleasant and time consuming job of separating the twine or net wrap from the plastic before the plastic can be recycled. Overall, one form of waste results in feeding time being reduced.